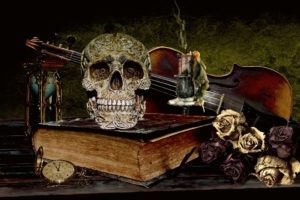 The Upanishads are one of the primary religious sects of Hinduism. The Upanishads primarily address the mystical (mysterious) concerns of life, which are (1) The creation of the world; (2) The nature of death.

There are 11 major Upanishads and four minor ones. The Katha Upanishad is the second (2), and one of the most famous. It offers a dialogue on death:

When a person dies, there arises this doubt. “He still exists, say some. “He does not,” say others, “I want you to teach me the truth.”

The Katha Upanishad consists of a running dialogue between Yama, the Hindu god of death, and Nachiketa, a boy. Nachiketa approaches death and wants to learn its secrets. Death discourages Nachiketa, telling him that learning the mystery of death can be destructive, but the boy persists, and a dialogue unfolds.

Yama first introduces Nachiketa to a form of discovery, called Brahma Vidhya. Most rational inquiry focuses on explorations of the external world. To explore death from this perspective leads us to see it in material and sensual terms, such as the deterioration of body and brain, or the loss of connection with loved ones. But the exploration of Brahma vidya seeks knowledge of an underlying reality which forms the foundation of all other inquiries and activities. That is, it explores the basic force or primal ground, which makes all life processes possible: The basic life force.

The fundamental grounding is the concept of Brahma. Brahma is the transcendent world. It is represented in mind as an experience of nothingness or omnipresent presence only. In the world, it is the non-dualistic universe, above the senses and different from all other aspects of the world and consciousness. An aligned Hindu concept is Purusha or spirit.

The Brahma held in individual consciousness is called Atman. It is the manifestation of Brahma in us. In western discourse, Brahma is often referred to as the soul. Western mystical traditions generally equate God to this concept of transcendence. The infinite. The unknowable.
Yama teaches that death is only of the ego. To transcend death, Brahma consciousness must be developed.

In a sense, this fundamental energy becomes distributed in our mental and physical being, all dualistic modes. However, the Brahma is the true self, while the ego world is maya, or illusion.

We live in two worlds by virtue of our humanity–body and mind– with the Atman co-existing and with the possibility of Atman infusing all ego activities. In fact, we go in and out of these two states. During meditation practice, we often touch Atman, and as I have written before, experiences of nature often change our level of consciousness to Atman. Atman infuses certain sleep states.

The two worlds we live in are reflected in the mind. The deadlines, disappointments, successes, and failures are part of that outer layer. We often confuse that for who we are. But we are deeper and more primal, that pristine part of us is the pure vitality, the pure aliveness of being, that we touch by letting go and entering Brahma.