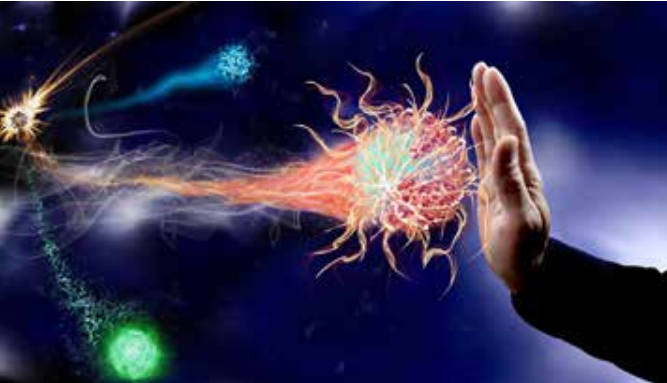 We are living in unusual times but not so unusual that we can’t survive. To survive and thrive, we need to pay attention to what’s happening in the world without becoming overly distraught. By understanding that our immune system is our greatest ally, we can make better choices when dealing with stress.

When we have a strong immune system, the germs, viruses, and bacteria that we inevitably encounter won’t interfere with our health. When confronted by these villains, a healthy immune system destroys them so successfully that nothing else may be necessary. We may not have noticed that anything was going on while our body was successfully winning another battle.

In 1876, the doctor who later became known as the “father of homeopathy” created a system of alternative medicine based upon his realization that the stages of a disease process are based upon the body’s ability to respond. Samuel Hahnemann believed that the body has an innate capacity to keep itself healthy; and that this energetic condition of the body, which he called the vital force, determines one’s health. When the body’s vital force is in a harmonious state, we experience health. When in a discordant or disturbed state, we become ill.

Hahnemann believed that medicine is only needed when the body cannot remove whatever is causing the disturbance. The difference between his (our) viewpoint and the typical Western, conventional, or allopathic viewpoint, is that drugs, radiation, and/or surgery aren’t used as the first line of defense to treat or suppress symptoms of disease.

Whether you subscribe to the conventional (allopathic) viewpoint or are more holistic in your approach, it may be comforting for you to know about the many amazing ways your body is designed to handle the germs, bacteria, and viruses that you encounter.

When you first encounter an invader, such as a germ, virus, or bacteria, your body’s first line of defense is the acid/base balance in your stomach. When your digestive tract is functioning properly, the invaders that enter your body through your nose or mouth are most often killed by the acid bath in your stomach. An alkaline bath follows this in your small intestines. For this to work properly, your gut needs to be free of chemistry altering drugs, especially ones that promise relief by reducing the acid that many people believe is causing their indigestion. Proton pump inhibitors are drugs that reduce acid.

The next phase of handling an invader is a histamine response that is designed to flush out irritants. Taking an anti-histamine is generally counterproductive because it blocks the body’s natural defenses.

If your histamine response doesn’t work, your immune cells respond. This requires more energy and is typically followed by more symptoms. This is a critical point as the body’s health comes into play and greatly influences the immune response. Since the health of one’s immune system relies on the same basic practices needed to improve overall health, incorporating healthful practices is a win-win.

Many studies have shown the correlation between stress and immune system health. Theorists have proposed that stressful events may induce sympathetic nervous system and endocrine changes in addition to other biological responses — and that these changes ultimately impair immune function.

Approximately fifteen years ago, a meta-analysis of almost 300 independent studies over 30 years indicated that psychological stress was associated with suppression of the immune system. This analysis showed a definite correlation between stress and many immune-related and autoimmune diseases, such as inflammatory bowel disease, allergy, atopic dermatitis, and celiac disease.

When we’re exposed to a threat, we go into “fight, flight, or freeze.” In the past, threats to our survival usually involved large animals, such as tigers. Our survival depended upon using all of our available energy to either fight the tiger or run away from it. The less unfortunate froze in fear and were eaten!

The same energy that runs our immune system is rerouted to the fight or flight response systems that kept our ancestors alive when threatened by large predators. The innate wisdom of the body knows that if we’re eaten by a tiger today, it doesn’t matter if we get sick from a virus or bacteria tomorrow.

The tiger in today’s world is the microbe. Even if we know we’re being attacked, our response hasn’t evolved to fight many of the new microbes in our world. Unfortunately, our immune system’s defenses are lowered further when we go into fear, making it more likely we’ll become sick from the microbe. This new tiger can eat us at its leisure when we’re in freeze rather than fight.

Anything that keeps you in a state of stress is counterproductive to your immune system health — so don’t let stress get the best of you! Stay positive, help make the world a better place, and use common sense, like washing your hands more regularly with soap and water, especially after being in public places. Drink more water, take high-quality supplements, especially Vitamin C, B, D, A, Zinc, Magnesium, and small amounts of organic copper, and get adjusted. The chiropractic adjustment hugely stimulates your immune system and helps you stay healthy.

If I had room, I’d explain how the immune system catches, analyzes, and creates specific immune cells to destroy whatever is trying to invade us. The first encounter takes 10 to 14 days to ramp up a counter-attack. If reinvaded with a similar virus or bacteria, it may take only 24 hours – which is why sometimes you get a 24-hour flu.

Come on in and let us know how you beat the new tiger!