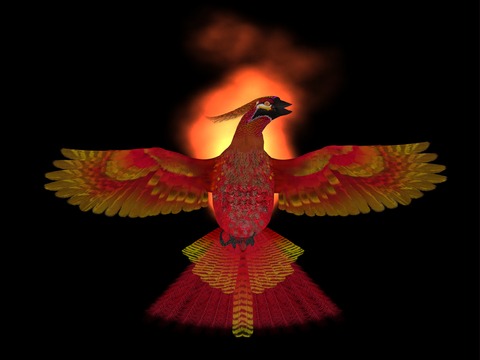 A bird that is reborn from ashes

This mythical bird has long been known as a symbol of rebirth and renewal. For centuries people have looked for hope through this magical bird. It was said that this bird would live a very long life. Some noted a life span of 500 years and others up to 12,994 years. The story goes that as the bird approached the end of his life, he would build a nest of aromatic branches and spices, then set it on fire and lay in the fire. Three days later, a new Phoenix would rise from the ashes. The new reborn Phoenix would then take the ashes of his predecessor to Heliopolis to deposit them at the altar of the Sun God.

This bird has shown up in many cultures throughout the centuries. This bird is known as the Thunderbird in the Native American culture, Firebird in the Slavic folklore, Feng Huang in the Chinese stories, and Ho-0 in the Japanese culture. But most of us have learned of this Symbol of renewal and rebirth from the Greeks, which they called this bird the Phoenix.

In the Jewish culture, this bird known to us as the Phoenix was called Mitcham, also known as Chol. As the legend goes, Chol lived in the Garden of Eden. After Eve offered the forbidden fruit to Adam, she then turned to the other animals and birds, offering them the fruit, and only the Chol resisted. God then granted this bird eternal life to live in peace for a thousand years; when his time was concluded, the Chol would be reborn and repeat his cycle of life.

As you can see, many cultures (many more than even mentioned) lead us to understand the evolution of thought and renewal for the human spirit.

As the year 2020 is now behind us, we are now ready for hope and change and look forward to renewing our spirit. Like the Phoenix as he rises from the ashes soaring to new heights as he flies across this Earth, transforming the oppressive energy and painful life events of the past year, renewing all of us as we enter the 21st year of the 21st century!  We have grown through adversity and are now re-emerging. According to spiritual beliefs, you have to die and release negative karma to be born again a more evolved soul.

Let go of the year 2020, which held so much destruction of life and faith, many never to stand strong again. The aging Phoenix fell into death throws that scorched the Earth with plague and suffering. If you stayed true to your belief that you can manifest your future, praying/meditating for peace and the end of suffering not allowing yourself to remain in the anger or pity, then you too will, as the Chol be given an everlasting life evolving your soul to greater things to come.

Following the Phoenix mythology, being renewed through death and rebirth allows us to test our abilities to forgive ourselves and others letting go of negative thoughts and words. It is now time to fly high above all the difficult times. The common element in all the cultures who have written of this mythical bird was to have a desire to overcome obstacles, as we are all capable of rising from the ashes and be renewed.

Make this your year to get into the habit of meditating or praying daily.

See the world healthy and at peace. Know you have the power to make a difference simply by being a better person and giving to others when you can. I have often written about “paying it forward.” This can be a simple jester, but sometimes a life-changing moment when helping others in even small ways. As we will be able to again, in time, hug each other and show a smile to those who so desperately need to see it, you will be giving the greatest gift: a gesture of love and caring for others. Happy New Year!

Clairvoyant, Minister, Writer, and Certified Spiritual Counselor. She has been a professional psychic for more than 40 years with proven accuracy. To make an appointment, please Text 248-826-8255. Leave your name and that you want to book an appointment. To find out more about Wendy and her readings, visit her website: WendyPowers-Clairvoyant.com

Zoom or phone sessions by appointment only.