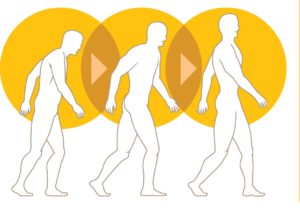 Many times people ask me how I got interested in my career in Structural Integration (a.k.a. Rolfing). At the time, there were a number of things going on in my life and my body. Over time, I discovered that it was very difficult to walk even a block or two. I would become very fatigued in my leg and hip muscles and if I tried to push beyond that limit it turned into pain.

I already knew that I had hyper-extended knees and one hip that was higher than the other. What made things even worse was that I possessed a forward head posture. That is where the head is actually hanging out in space as it sits quite a bit forward in front of the rest of the body. This was causing frequent headaches due to the pressure it was putting on both nerves and fascia.

When I walked down the street and would catch my reflection in a store window, I observed my poor posture and this was never a happy experience. I was also becoming increasingly aware that I wasn’t really living in my body. I was a head directing my body from place to place.

One day in the mid 1970’s, I walked into a bookstore and saw a book called, Rolfing, The Integration of Human Structures by Ida P. Rolf. This book just about leapt off the shelf into my hands. As I glanced through it I could see that it discussed a number of case studies with numerous pictures of people before and after they experienced Rolfing. (Since this was the day before Photoshop™, the pictures were quite convincing). I saw some of my own poor postural patterns in the ‘before’ photos.

Up to that point, I thought this kind of profound structural change was not even possible. I thought that how you came into the world was just the way you stayed. My attempts to instruct my body to stand differently had only lead to adding another layer of stress and tension to the mix. For better or for worse, I thought you were stuck with your body’s structural posture. However, the before and after pictures of these subjects gave me new hope for a powerful and lasting change.

After reading and studying the book, I began my search for a Rolf Practitioner. It took a while, but I finally learned of a Rolfer who lived in Chicago, IL, who came to Kalamazoo, MI every other week to treat clients.

I immediately signed-up for the Ten Session Series. At the time, I was living in Detroit and did not have access to a car. So I took the train to Kalamazoo, and then boarded a bus that took me to the end of the line. I then walked another 20 minutes to where the practitioner saw his clients. It turned out to be well worth the trip.

After the first three to four sessions, my hyper-extended knee problem significantly improved. As it cleared up I became aware of a huge emotional piece that was directly tied into my knee pattern. You see, when someone has hyper-extended knees and you push them lightly on their torso, they tend to easily be uprooted and fall backwards. For me, this structural pattern translated into the feeling that I didn’t have a leg to stand on and had a hard time saying “no” to others. As my knee issue resolved, my self-esteem increased and I gained 3/4 of an inch in height and could walk comfortably for miles. One of the most profound changes was that I now felt at home and at one with my body.

These are some of the things that have drawn me to this work. I personally continue to get the periodic Rolfing work done on myself because of the continual value I receive both physically and psychologically. There is a range of positive improvements. I will always be grateful to Ida Rolf both for what I have received from my Rolf practitioners, and for what I have been able to offer to others.