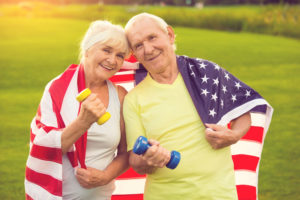 Strength equates with safety and security — for good reason. When we are strong, we can protect ourselves as well as those we care about, such as spouses, kids and even the aging family dog that used to protect us.

We also need strength for the activities of daily living that most people take for granted. These include bathing and grooming, getting dressed/undressed, shopping for food, meal preparation, eating, washing dishes, house cleaning and taking out the trash, etc.

I like to be a minimalist when it comes to how much equipment I need for strength training. You can do well with a few pieces of equipment whether at home or at a gym. Gyms look cool on commercials but so does everything else on a commercial. Quite simply, you have to move and challenge your muscles and bones no matter where you do it.

This daily routine should start with the seven essential stretches to warm up your muscles, ligaments and tendon stretch receptors. Tendons are composed of amazing cells which anchor into the bone as transition tissues of muscle. Tendon stretch receptors only turn on when stretched to protect you from excess loading of the muscles and bones when exercising or doing an activity. We have seven of the easiest but most essential stretches on a handout that you can pick up by calling the office, 734-425-8220, so we can have one ready for you.

I also recommend that people of all ages and physical abilities use free weights several times per week. They’re available in various sizes/weights and aren’t attached to a machine or each other.

We all have large muscles and small muscles, each very important. Even if small muscles don’t significantly add to strength, they need to be activated for the body to function normally. They add stability to the body as well as providing feedback to tell the brain where other parts of your body are in relationship to each other and the world around you.

The muscle spindles also provide feedback and information to the brain to keep the body and muscles coordinated with each other. A specific type of thrust utilized with the chiropractic adjustment resets these spindles. Whether done manually (with a chiropractor’s hand) or with an instrument, the resetting of these muscle spindles is one of the reasons why the chiropractic adjustment works such magic. No amount of stretching or any other exercise or therapy can achieve this as well or as consistently.

We build different types of muscle through the kinds of exercise or work that we do. Bodybuilder muscles are typically large muscles that appear formidable but are often more for looks than function. If we exercise using weights with a high number of repetitions, we’re more apt to build muscle through what’s called hypertrophy. These muscles have a larger fluid content giving them the increased size.

The other major type of muscle is built through hyperplasia. Hyperplasia refers to the muscle bundle splitting into strong layers like plywood. The muscle bundle has become very strong even if it doesn’t look as big. This is done as described below:

Exercising to achieve the strongest muscles is best accomplished using weights that are on the edge of your capacity to move them. A routine should be comprised of 3 to 7 repetitions with the appropriate weight. The last one to two movements of the weight are ones you’re just barely able to do. They’re often accompanied by a burning sensation in the muscle, ergo the expression “feel the burn.” You take a two-minute break between sets – and do 3 to 4 sets.

When it becomes easier, you increase the reps up to 7. When you can do that easily, you increase the weight by about 5 pounds, go back to repetitions of 3 and build back up. If you want little muscle mass, little strength, and big endurance, run marathons. For most people, eight to twenty-eight minutes of aerobic exercise approximately three times per week will condition the heart.

One of the best styles of exercise was designed by Dr. Philip Rasch, head of the Naval Human Performance Laboratory at MCB Quantico. He developed workouts for the Marines, Navy UDT, and early SEALS. If you watch a baby crawl, it pulls with the upper extremities and pushes with the lower. Doing a pulling exercise such as pull-ups exercise 70% of the upper body. Doing a pushing motion with the legs handles 70% of the lower body.

The abdominal girdle is divided into front and back muscles. Doing a supported partial sit-up while holding a weight is good for the abs. Forward deadlifts strengthen the low back when done with the proper weight. I enjoy using kettlebells for my heavier exercise routines.

Wolff’s Law says that bones will adapt to the loads under which they are placed. Bones mineralize and become stronger to resist the forces placed upon them and will become thinner and weaker if there are no forces to act against. The exercise we do today will help us maintain health into our golden years.

I’ve found that the hallmark of happy people, especially seniors, are those who have been able to maintain their independence. I believe that staying physically active and doing regular strength training can help anyone stay independent throughout life. Besides, it’s a well-known fact that exercise is good for mental health!

At our July 26 workshop, we’ll help you start an exercise program without hurting yourself, or tweak the one you’re already doing. We’ll talk about the best foods and supplements to help build strong bones and muscle — and what to avoid, such as fluoride which has been shown to make bones brittle.